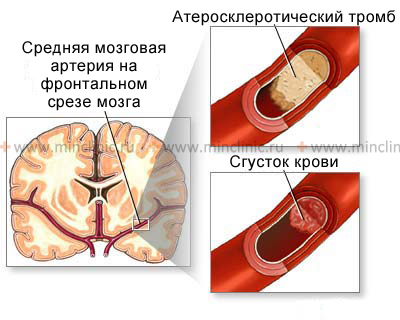 Middle cerebral artery is most often exposed to thrombosis and embolism, which lead to ischemic stroke.

Embolism and thrombosis, most often exposed to middle cerebral artery basin vessels. With complete occlusion of the lumen (occlusion) blocked artery trunk as perforating branches to the deep white and gray matter of the brain, and large branches to the surface of the cerebral cortex. The classic picture of the lesion is characterized by hemiplegia (paralysis of half of the body) and unilateral anesthesia (loss of sensitivity than half of the body) on the opposite side of the body.

With involvement in the pathological process in the dominant hemisphere stroke patient's brain, there is also a total sensorimotor aphasia (impairment of perception and reproduction of speech). In cases of non-dominant hemisphere lesions of the brain clinical symptom complex is complemented apraktoagnoziey and anosognosia (inability to understand or recognize objects). If the patient has dysarthria (impairment proper motion of the vocal apparatus during speech playback), then dysphasia (impairment of speech perception and reproduction) is observed.

Visible neurologic manifestations of lesions of the middle cerebral artery basin often noted at occlusion (occlusion) of the lumen of this artery trunk embolus. To establish an effective collateral blood circulation of the cerebral cortex at a specific time, but it leads to the development of partial occlusion of the lumen of syndromes in the trunk of the middle cerebral artery on the background of its atherosclerosis with subsequent thrombosis.

Partial neurological syndromes are also found at middle cerebral artery basin embolism. Embolus can get into the trunk of the artery, to spread further upward (distally), penetrate into the overlying (distal) branch and subject to further dilution (lysis). In accordance with the process objective and subjective neurological symptoms varies. Certain syndromes are diseases caused by embolic occlusion (occlusion) of one of the branches include:

Sensory impairments, weakness in the limbs and motor aphasia suggests embolism at the site of exit from the upper branches of the division. When re-aphasia without paresis, probably a lesion in the lower division of the middle cerebral artery, as coming from a branch supply blood to the rear area of ??the dominant hemisphere sensory cortex. The sudden appearance of the difficulties caused by ignoring half of the body and spatial agnosia, with no evidence of paralysis of the lower division of the damage of the middle cerebral artery non-dominant hemisphere of the brain of the patient.

Anterior cerebral artery of the brain has two segments:

A2 segment of anterior cerebral artery cortical branches through their supplies blood 2/3medialnoy front surface of the orbital part of the frontal lobe, frontal lobe pole, strip the bark along the border and verhnesredinnoy 2/3mozolistogo front of the body. On the other hand, the A1 segment of anterior cerebral artery gives a lot of deep penetrating branches, going mainly to the anterior thigh of the internal capsule, anterior perforated substance, almond-shaped body, the anterior hypothalamus and the lower part of the head of the caudate nucleus of the brain.

Clinical manifestations of blockage (occlusion) in a pool of both anterior cerebral arteries include bilateral pyramidal disorders with paraplegia (paralysis of the left and right halves of the body) and marked changes in the psyche in connection with bilateral lesions of the frontal lobes of the brain.

Anterior artery of the choroid plexus of the brain begins from the internal carotid artery supplies blood back hip of the internal capsule and white matter of the brain from the side and behind of it, through which the portion of the optic fibers from the lateral geniculate body to the calcarine sulcus. This area of the brain supplied with blood of:

Therefore, the full clinical syndrome of contralateral hemiplegia in the form of (paralysis of the muscles on the opposite side), hemianesthesia (hypoesthesia) and gomonimnoy hemianopsia (loss of half the visual field on the affected side of the brain) can not develop. Instead, there are syndromes with a minimum severity of neurological focal disorders.

Indeed, in cases of surgical occlusion of the anterior artery of the choroid plexus for the treatment of Parkinson's disease in some patients does not show signs of lack of blood circulation in the area of ??its basin. Patients who originally observed the detailed clinical symptoms often recover completely or partially, apparently thanks to a sufficient level of collateral blood flow in this part of the brain. 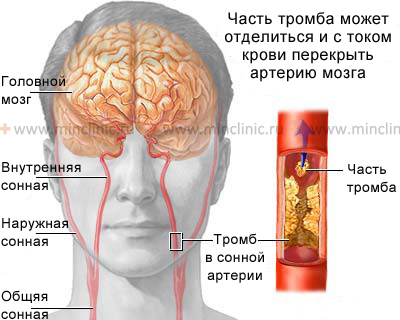 Atherosclerosis with thrombosis of the internal artery weed can cause transient ischemic attack (TIA) or stroke (cerebral infarction).

When symptomatic lesions of atherosclerosis with thrombosis of the internal carotid artery, regardless of the cause of cerebral ischemia in the basin often suffers from a region of the middle cerebral artery supplied with blood. Cerebral infarction (stroke) due to low blood flow, often localized in the distal cortical branches of the basin of the middle cerebral artery, leading to the development of transient or gradually increasing weakness in the muscles of the pelvic and shoulder girdles and upper limbs. Sometimes there are episodes of transient cerebral ischemia, accompanied by dysphasia (impairment of the understanding or reproduction of speech) or hemiparesis (muscle weakness, half of the body) with a duration of 10-15 minutes, followed by regression of neurological symptoms. The maximum number of similar episodes of transient ischemic attack (TIA) patients per day up to 5-10.

With the involvement of the dominant hemisphere of the brain in transient ischemic attack (TIA), one can observe transient aphasia or dyscalculia (impairment of the account). With involvement of the non-dominant hemisphere of the brain may occur transient neglect of the body. With the damage of the lower division of the middle cerebral artery of the dominant hemisphere aphasic The expressed frustration with the fugitive jargon, with the written and spoken language the patient can not understand (Wernicke aphasia). Even arterioarterialnyh embolism neurological symptoms is often transient in nature due to the fact that emboli can cause an incomplete occlusion of the trunk or branches of the middle cerebral artery, or be subjected to lysis (dissolution) and transported to the distal (above the blockage of the lumen) direction.

Carotid artery stenting is a minimally invasive procedure that restores proper blood flow to the brain when there is an area of narrowing, or stenosis, in one of the carotid arteries. A small metal tube, or stent, is paced through the area of stenosis to keep the artery open.

In most cases, it turns out that if the neurological symptoms of cerebral ischemia when held long enough, but less than 24 hours, then it is due to embolism of the artery. In those cases where the neurological symptoms of cerebral ischemia is transient (transient) in nature and is retained only a few seconds or minutes, it is usually difficult to differentiate between embolic and hemodynamic its nature.

In addition to the brain, the internal carotid artery supplies blood optic nerve and retina through the ophthalmic artery. Approximately 25% of clinically manifested occlusion (blockage of the lumen) of the internal carotid artery occasionally arises transient blindness in one eye. In the future a high probability of permanent blindness. Describing such an episode, a patient may tell the doctor about a feeling or subsiding and disappearing shadows crossing the field of view or loss of peripheral regions of the visual field. There are also complaints of blurred, blurred vision in the affected eye or in the absence of upper or lower half of the visual field. Most often these symptoms persist for a few minutes. Less commonly, a stroke at the same time celebrate the occlusion (blockage of the lumen), ophthalmic artery or central retinal artery. 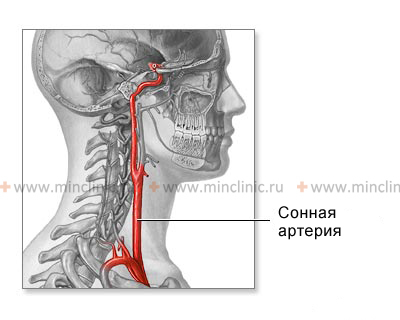 Anatomy of the common carotid and internal carotid artery gives to understand the mechanism of ischemic stroke.

In the diagnosis of this condition by occlusion of both common carotid arteries are the leading symptoms of the following:

Often there is a partial syndrome of the aortic arch, consisting of various combinations of stenosis and occlusion of the carotid, subclavian and innominate artery.