Before one of the most common causes of blockage (occlusion) of vessels in patients of all ages had syphilis. Since the introduction into clinical practice the drug penicillin, this kind of blockage of lumen has become a rarity. Vascular lesions with obstruction (occlusion) as the arteries, veins and may be accompanied by such infectious diseases as meningitis (tuberculosis, fungal and bacterial subacute flowing). At the same bacterial meningitis in a patient may be caused by Haemophilus influenzae, Streptococcus, or pneumococcus. Sometimes the first clinical manifestation of tuberculous meningitis in a patient may be a stroke. In such a condition usually develops after a stroke, the formation of meningeal symptoms in a patient. 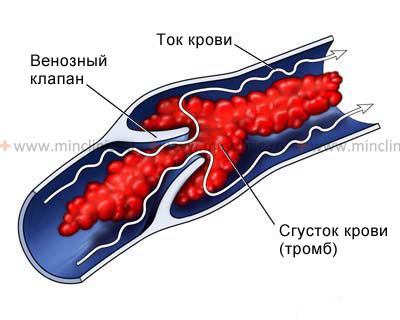 Infective emboli may cause thrombosis of cerebral veins, venous sinuses and arteries.

When fever and other rickettsiosis in brain capillaries and alveoli show perivascular inflammatory cells. It is possible that these changes in the vessels of the brain are responsible for epileptic seizures, acute psychosis, coma, reflect the involvement in the pathological process of the central nervous system. However, they do not cause strokes. Blockage (occlusion) of the internal carotid artery develops in diabetic patients with infection mukoroznoy orbit and cavernous sinus.

With the sudden appearance of trichinosis jerking, aphasia, hemiplegia, and coma combined or, more commonly occurs after systemic symptoms and muscle damage. The reason for the symptoms of brain damage has not been established. In the brain can detect parasites. In one case of brain damage were caused by small emboli from the heart to the background of marked myocarditis.

MRI angiography of veins of the brain shows a left transverse sinus thrombosis.

Malignant, or falciparum, malaria is often characterized by the clinical condition known as cerebral malaria, in which the convulsions, coma and sometimes focal symptoms are determined by occlusion of the capillaries and precapillaries masses of infected red blood cell activator.

Some of the arteritis of unknown origin:

In addition, arteritis (inflammation of the artery walls) may be caused by the herpes simplex virus and serve as one of the manifestations of acquired immunodeficiency syndrome (AIDS) and systemic lupus erythematosus.

Thromboangiitis obliterans cerebral vascular disease (Vinivarter-Burger disease) is not included in the reporting list. Despite the extensive literature on the subject, with regard to this disease there is so much doubt that she does not deserve further discussion. All details of the patients was detected carotid atherosclerosis or cerebral arteries with "stasis - thrombosis" more distant intracerebral branches. The situation with Buerger's disease that occurs with damage to the lower extremities, also is uncertain.