In close collaboration with spine specialist Dr. med. univ. Bertagnoli has created a new instrument for the treatment of herniated discs and stenotic intervertebral foramen. The instrument combines a 2.7 mm diameter fiberscope with a working channel for tissue removal using a laser probe in a single bending end guide tube with an outer diameter of only 4.0 mm. The operating sleeve allows for the suction of the vaporized tissue. 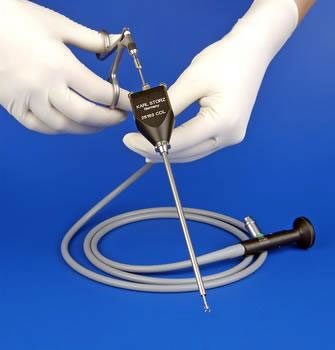 Foranoscope with an instrument installed in it.

The difference between the spinoscope and conventional neurosurgical instruments

The existing instruments used for percutaneous operations for intervertebral disc herniation, in most cases, are rigid, have a mostly direct design, and allow intradiscal decompression in the r-a-direction only indirectly. They do not give direct access to a herniated disc. Endoscopically controlled surgery for a herniated disc is possible, usually through a two-portal approach.

Foraminoscopic decompression with straight and rigid instruments is very limited and does not create either intraforaminar access or access to L5 / S1. With these methods, control over the movement of instruments is not available. Existing bendable instruments do not provide sufficient soft tissue resistance.

Advantages of the spinoscope over previous methods: 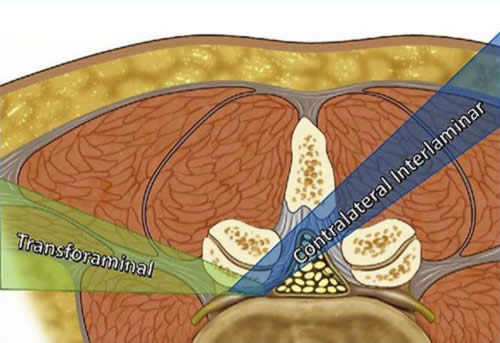 Application of the spinoscope in endoscopic percutaneous laser discectomy

The Spinoscope is an endoscopic system developed for intra- and non-disc treatment of herniated and degeneration of the intervertebral disc, as well as spinal foraminal stenosis of the lumbar, thoracic and cervical spine using a laser.

The spinoscope is mounted on a holder that allows the surgeon to guide a flexible 0.6 mm laser probe with exceptional precision to the pathological site of the disc.

The endoscopic optical system allows the laser probe and light guide to be moved within the disc under direct visual control with millimeter precision forward and backward. The angle of deflection of the end of the probe/fiber can be set from 0 ° to 90 °.

Several patients have been successfully treated with a spinoscope on several parts of the spine:

Abstract: Spinoscope is a useful, state-of-the-art instrument for various purposes within the framework of minimally invasive surgery of the intervertebral disc and spine, not only as an independent technology but also in combination with mechanical instruments.