With prompt access to deeply located intracranial lesions of the brain, cerebrospinal fluid system, and its vessels, endoscopy can be used to support microsurgical interventions and test their effectiveness. This method of surgery is called “endoscopically assisted microneurosurgery” (EAM). The operating microscope provides the neurosurgeon with direct illumination and enlargement of the operating field, but it only allows a detailed image of surface structures. For visualization and preparation of anatomical structures located deeper, it is required to influence healthy anatomical zones located on the surface, which inevitably leads to their injury. The combination of the microsurgical method of surgery with endoscopy allows this to be avoided since with the help of an endoscope it is possible to see structures located under and above the surface without injuring them.

Fig. 1. Microsurgical (A) and endoscopic (B) images of the 7th and 8th cranial nerves through a retrosigmoid approach. With the help of a loop introduced through the anterior inferior cerebellar artery (a. Inferior anterior cerebelli), we can clearly distinguish the conflict, which is the cause of facial muscle cramps and deafness.

The surgical microscope is used to insert and guide the endoscope during Endoscopically Assisted Microneurosurgery (EAM). During the operation, the endoscope guarantees optimal visibility when dissecting deeply located structures, as well as reducing trauma to the surgical field caused by the neurosurgical intervention.

The rigidity of endoscopes and other microsurgical instruments is a condition for their good control by the hands of a neurosurgeon during surgery. Since endoscopic observation is possible only in preformed anatomical cavities, Endoscopically Assisted Microneurosurgery (EAM) is effective and beneficial only in the surgical treatment of local lesions or lesions that extend to the subarachnoid cisterns, as well as the ventricular space (perforating branches).

Fig 3. Endoscopic image of the optic nerve intersection (A) and pituitary pedicle (B) after microsurgical removal of a large adenoma through a transphenoidal approach.

Endoscopically Assisted Microneurosurgery (EAM) has been shown to be particularly effective:

Endoscopic control of the microsurgical process is also of great benefit in transphenoidal access to lesions in the Turkish saddle and adjacent areas (Fig. 3).

Fig 4. Microscopic image of a small aneurysm of the posterior wall of the internal carotid artery (A); an endoscopic image of the lesion before (B) and after clipping (C). Clipping was performed under endoscopic control to avoid damage to the perforating branches that were outside the microsurgical field of view.

One of the most important functions of endoscopically assisted microneurosurgery (EAM) is to treat aneurysms, especially in the posterior wall of the internal carotid artery (Figs. 4 and 5) and posterior circulation (Fig. 6).

Endoscopically assisted microneurosurgery (EAM) usually uses endoscopes with a lens at an angle of 0 ° and 30 °. In the treatment of large and cystic lesions, endoscopic observation is carried out gradually by inserting the instrument "manually" during the operation. In the case of cerebral aneurysms, the endoscope should be secured with an appropriate system of holders in the operating field, and, if possible, through access that is not used in the microsurgical method. The only way to avoid damage to important vascular structures in the affected area (perforating branches) is to combine timely endoscopic and microsurgical control. 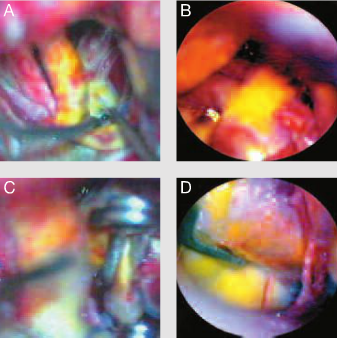 Fig 6. Clipping of the basal aneurysm shown through the right pterional approach: the posterior communicating artery (A) obstructs the microscopic visualization of this extensive lesion, while the endoscopic image clearly shows the lesion substructure and vascular system near the lesion (B); although the proximal part of the clamps is visible with a microscope (C), the endoscope allows better control of the blades (D).

Professional training in these neurosurgeon skills is crucial for the combination of endoscopy and microsurgery. Strategic placement of monitors in the operating room is also required. The availability of specific endoscopes and holder systems is essential for achieving good results in endoscopically assisted brain microneurosurgery (EAM).