Endoscopy in neurosurgery was developed by W. Dandy and V.I.Mixter at the beginning of the twentieth century and, thanks to the technical improvement carried out in the 60s by G. Guiot, is also used in modern medicine. In 1996, this increasingly popular method was used primarily for the four important indications listed below.

Ventriculocisternostomy covers approximately 80% of neuroendoscopy indications. This intervention provides an effective treatment for hydrocephalus obstruction below the anterior part of the 3rd ventricle (posterior part of the 3rd ventricle, Regio pinealis, Sylvian aqueduct, fourth ventricle, foramen of Magendie). Obstructive hydrocephalus accounts for approximately 20% of all hydrocephalus. A condition for ventriculocisternostomy is the active function of the resorption zones of the cerebrospinal fluid. Endoscopic control ensures that the fundus of the 3rd ventricle is completely safe to open in front of the Corpora mamillaria, thereby creating a direct connection between the dilated spaces and the pericrebral subarachnoid spaces.

Also, neuroendoscopy allows the treatment of occlusive hydrocephalus without the need for multiple bypass systems. 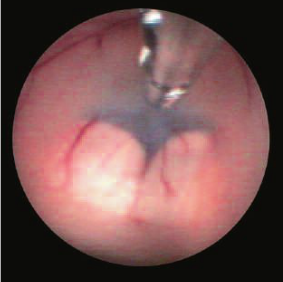 Ventriculostomy of the 3rd ventricle floor.

Neuroendoscopy allows the creation of multiple connections between arachnoid cysts and ventricular and/or skull base cavities. Ventriculocystocystomy for suprasellar and temporal arachnoid cysts is the most common indication. 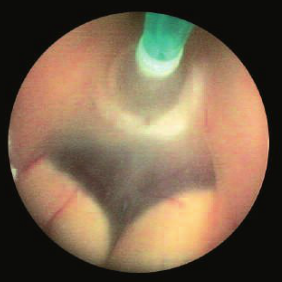 Expansion of the stoma at the bottom of the 3rd ventricle using a Fogarty balloon catheter.

Treatment of colloidal cysts of the 3rd ventricle

Neuroendoscopy makes it possible to puncture colloidal cysts of the anterior part of the 3rd ventricle with optical control in a way that is gentle on the surrounding structures (Plexus choroidei, Venae choroideae, Vena thalamostriata, and Vena septi, as well as the anterior fornix). Microscissors can be used to open the sidewall of the cyst wide to facilitate emptying of the cyst. The remaining fragments of the lateral wall are then treated with electrocautery to avoid relapse. 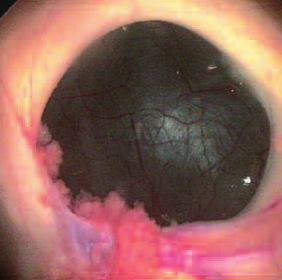 Craniopharyngioma of the 3rd ventricle in diagnostic optics.

Neuroendoscopy allows biopsy of tumors with intraventricular development, as well as biopsy of the lateral walls of cystic tumors, while the negligible size of the fragments taken requires multiple samples in each case. In case of bleeding, hemostasis is possible through coagulation. 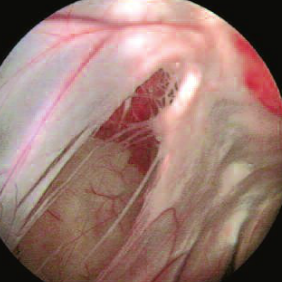 Fixation and control of the neuroendoscope