When examining the eye, a neurologist or neurosurgeon can directly observe the vascular and nervous tissue of the examined person. It is the only organ that, thanks to its anatomy, allows the doctor to see the nerve and blood vessels without performing any preliminary incisions or punctures of healthy tissues in the patient.

The eye is the organ of vision. The eyeball is designed to focus light on a highly sensitive neuronal membrane - the retina. Upon entering the eyeball, light first passes through the cornea, intraocular fluid, lens, and vitreous, then crosses the transparent layers of the retina and reaches the photoreceptors in the outer nuclear layer. 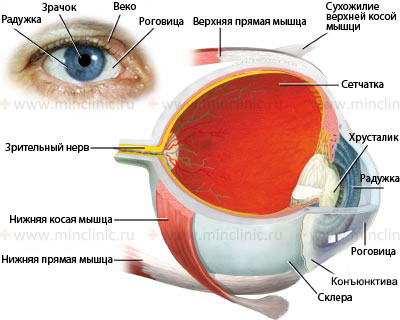 External and internal anatomy of the human eyeball in section.

The amount of light entering the lens required to produce an image on the retina is controlled by the diaphragm. The role of such a diaphragm is played by the iris of the eye. The opening in the iris - the pupil - can be narrowed or widened using special muscles in the iris. Light hitting the retina is captured by the fundus photoreceptor cells. These nerve cells in the retina are called rods and cones. Retinal rods and cones contain visual pigment. This visual pigment allows them to capture the luminous flux of photons. A physiological reaction of nervous excitation and inhibition occurs at complex synaptic levels of retinal cells. This makes it possible to evaluate the properties of light entering the eye from the standpoint of spatial, light, spectral, and temporal functions.

The rods and cones located in the retina differ in their function. The rods capture low-intensity light (scotopic vision) and are not involved in color detection. Cones respond to light of greater intensity (photopic vision). Cones also have good resolution and are involved in color vision. Cones are abundantly located in the center of the retina in the macula, consisting of a central fovea and the smallest rounded dimple. The fossa is located at a distance of 3 mm towards the temple from the edge of the optic nerve head. At this point, a great visual acuity is noted (normally 20/20). Visual acuity drops sharply in the paramacular zone, where the number of cones becomes much less. In the retina of the human eye, the number of rods exceeds the number of cones (100 million rods, 60 million cones). The rods are absent in the dimple, their concentration reaches a peak at a distance of 20 ° from the dimple, gradually decreasing towards the periphery. 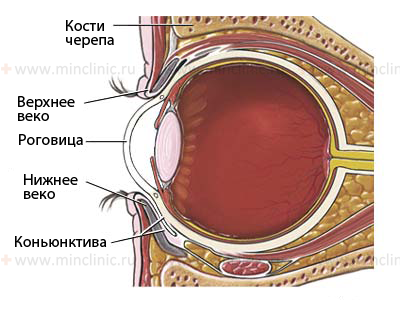 External and internal structure of the human eyeball (side view in section).

The distribution of ganglion cells is the same as in cones. In the area of ​​the dimple, one ganglion cell through a bipolar neuron forms a connection with one cone (ratio 1: 1), which maximizes the resolution. Primary processing of visual information occurs in the retina, then it is transmitted in the form of electrical impulses from ganglion cells along their nerve fibers in the optic nerve to the lateral geniculate body of the brain. After synaptic switching, the fibers travel along the geniculate-occipital pathway to the visual center in the occipital cortex.

Human vision is divided into form, color, and light perception.

The Snellen chart consists of letters of various sizes. The distance at which each dimension is reduced by an angle of 5 ° is indicated on the side of the table. A patient with corrected refractive errors should wear glasses during the examination. Normal vision is 20/20. If the patient can only read letters up to line 20/30, visual acuity is defined as 20/30. If the patient is unable to distinguish the largest letter E on the top line, he must be transplanted to the table, thus changing the distance. Visual acuity can be defined as 10/400 if the patient can distinguish this letter at a distance of 3 meters from the table. 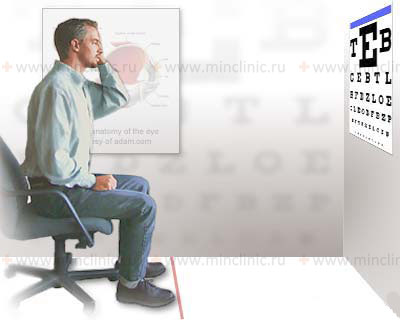 If the patient cannot read line 20/30, stenopic vision should be examined. Through a stenopoeic opening, passing a narrow beam of light rays, a patient with secondary visual impairment in case of refractive error should read lines up to 20/20. If this does not increase visual acuity, one should look for another reason for its decrease, for example, clouding of the eye media, spots, or damage to the optic nerve.

Visual acuity corrected by glasses or contact lenses only up to 20/200 or less on both sides, as well as concentric narrowing of visual fields to 10 ° in the United States is officially considered blind, such a patient must be registered with the Society of the Blind at the place of residence.

Human visual impairment is often characterized by acquired defects in color perception. For example, in some cases of macular lesions (due to intoxication or degenerative causes) or optic nerve (multiple sclerosis, toxins, drugs, malnutrition, tobacco-alcohol amblyopia), patients do not distinguish between red and green colors, although they perceive white color normally.

For the study of color vision, Ishihara polychromatic tables are most often used. Ishihara polychromatic tables allowing to identify visual defects in red and green colors, and Gardy-Rend-Ritler (GRR) figures, allowing to identify the impaired perception of red and green, as well as blue and yellow colors. To work in some specialties, a person needs a fully preserved color vision. Hereditary blindness to red, green, and other colors (color blindness) is also possible. 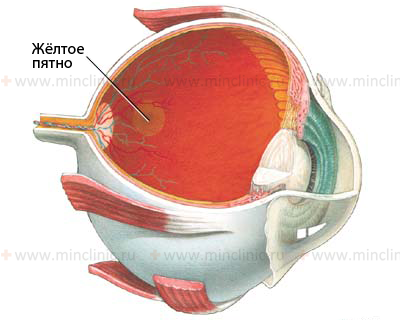 With macular lesions as a result of intoxication or degeneration, patients do not distinguish between red and green, but they perceive white as normal.

A person's light perception is assessed by examining the visual fields. The procedure for examining visual fields is called perimetry. Changes in visual fields indicate damage to a portion of the optic tract from the retina (along the optic nerve) to the optic cortex. The kinetic perimetry method (Goldman's hemispheric perimeter) is most convenient for studying visual fields. It consists of moving an object in the fields of view and establishing points of the same sensitivity in two fields. A patient with perimetry gives a signal when he sees an object, indicates when it disappears and when then reappears. In this way, a diagram of the patient's fields of vision can be drawn up, with an accurate indication of defects from the periphery to the central fixation point. You can also compare the peripheral visual fields of the patient and the doctor. 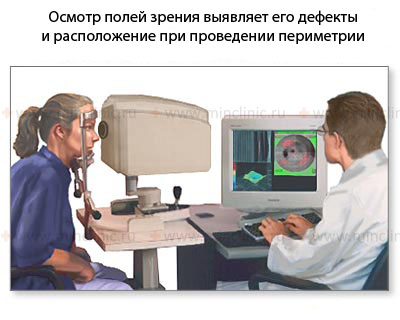 Examination of the visual fields (perimetry) reveals its defects and their location during the diagnostic perimetry procedure.

Fields of vision are considered normal if a person sees an object when diagnosing visual fields during perimetry: