Cornea is the main refractive surface of the eye. Due to the peculiarities of its structure and location, the surface of the cornea is very sensitive to impact. In this regard, the following pathological conditions are possible:

Inflammation and infection of the cornea are called keratitis. Keratitis is often accompanied by inflammation of the iris (iritis) or the uveal tract of the iris, the ciliary body, and the choroid itself (uveitis). 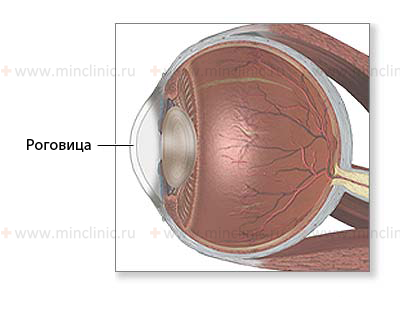 Being on the surface of the eye, the cornea is most susceptible to injury, drying out, and infection.

Metabolic disorders in humans can also lead to clouding of the cornea since substances that are in excess in the patient's body are deposited in it:

In case of severe scarring and/or clouding of the cornea, the patient may be indicated for keratoplasty (corneal transplant) to restore vision. 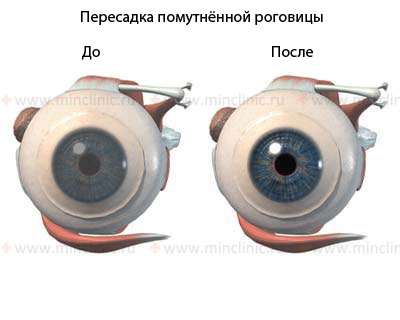 In the case of corneal clouding, a donor transplant operation is used to restore impaired vision.

Pupil size is determined by the intensity of light entering the eye. The size of the pupil is used to judge the presence or absence of difficulty in the innervation of the eye in a particular pathological condition in the patient.

Normally, moderate asymmetry of the pupils (anisocoria) of both eyes may occur, while their reactions to light and accommodation are preserved. Pathological anisocoria (asymmetry of the pupils) occurs with lesions of the sympathetic (Horner's syndrome) or parasympathetic (internal ophthalmoplegia) innervation of the eye. Horner's syndrome is characterized by a persistent reaction of the constricted pupil to light on the affected side, partial ptosis, and, in some cases, increased perspiration on the face.

Internal ophthalmoplegia (III pair of cranial nerves) is manifested by dilatation of the pupil (mydriasis) with no or weak reaction to light; when a 1% solution of pilocarpine is instilled, the pupil narrows. Local application of pilocarpine in various concentrations allows the doctor to distinguish cranial nerve palsy from mydriasis (dilated pupil) caused by the administration of drugs (atropine) or from Edie's mystical pupil. 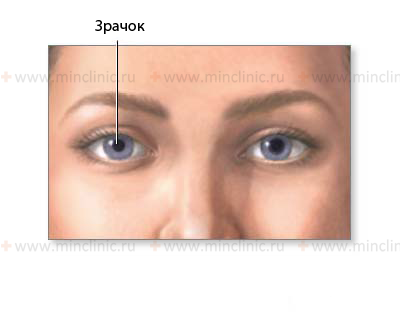 Depending on the size of the pupil and its response to light and accommodation, a neurosurgeon or neurologist can detect the impaired innervation of the eye in the event of a disease.

Glaucoma is the second leading cause of blindness in the world. Glaucoma develops in about 1 in 50 people over the age of 35. The majority of the population already has glaucoma, unaware of its existence. Therefore, the detection of glaucoma, as well as the measurement of blood pressure, is one of the necessary components when examining adult patients during routine medical examinations. Measurement of intraocular pressure must be included in the ophthalmological examination. Intraocular pressure (IOP) is considered elevated above 22 mm Hg. Art. (Shetz tonometry).

Patients with glaucoma may have significant daily fluctuations in intraocular pressure (IOP), including within the normal range, so it is very important to examine the optic discs to confirm glaucoma. The loss of the visual field follows the progressive depression of the optic nipple. This asymmetry of the optic nerve nipples can serve as an early diagnostic sign of glaucoma. With the progression of damage to the optic nerve, the death of the nerve tissue occurs as a result of its compression ischemia. This is followed by the development of optic nerve atrophy with a change in its contour (depression) and disc color (blanching). 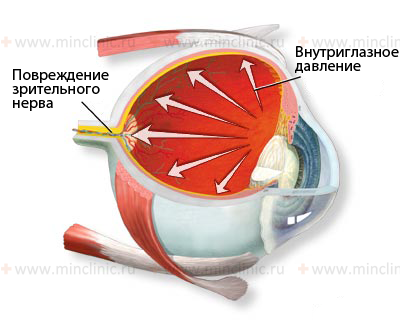 An increase in intraocular pressure in glaucoma leads to damage to the optic nerve that enters the eyeball from the fundus.

The main types of glaucoma that affect the human eye include:

Open-angle glaucoma arises as a complication of chronic difficulty in reabsorption (absorption) of intraocular fluid in the trabecular network. Open-angle glaucoma is usually asymptomatic, only in rare cases pain in the eyeball and corneal edema develops. Initially, the peripheral visual fields fall out, visual acuity remains normal until the later stages of the disease.

The diagnosis of open-angle glaucoma is based on the detection of increased intraocular pressure (IOP) and direct examination (gonioscopy) of the formations of the anterior chamber angle. The tactics of managing a patient with open-angle glaucoma in the early stages consist of detailed re-examinations with repeated measurements of intraocular pressure (IOP), the examination of the visual fields, thorough examinations of the fundus to detect the retraction of the optic nerve disk.

In rare cases, there is a need for surgical treatment of open-angle glaucoma. This prevents the patient from developing permanent visual impairment. For this, the following operations are used:

Angle-closure glaucoma develops when fluid outflow is obstructed by narrowing of the anterior chamber of the eye. The tissues at the periphery of the iris overlap the trabecular meshwork, preventing the exit of intraocular fluid. The obstruction to the flow of fluid occurs suddenly, usually on one side. At the same time, the patient's vision deteriorates. Chronic angle-closure glaucoma can lead to the dilated pupil (mydriasis), pain, and loss of vision in the patient. In the chronic and subacute course of angle-closure glaucoma, it is necessary to conduct a direct examination of the formations of the anterior chamber angle of the eye (gonioscopy) to determine the type of glaucoma.

Treatment of acute angle-closure glaucoma in a patient requires urgent measures. To combat a sharp increase in intraocular pressure (IOP), drugs are used:

After urgent measures, surgical treatment of acute angle-closure glaucoma may be required, aimed at creating a message between the anterior and posterior chambers of the eye.

Secondary glaucoma develops as a complication of a general disease already existing in the patient or as a local lesion of the eye. Among the common diseases and complications from taking medications that can lead to the development of secondary glaucoma, there are:

A cataract is a clouding of the lens that is localized in its center (nuclear), in the superficial cortical region, or the posterior subcapsular region of the lens. A cataract develops in response to changes in the physical and chemical properties of the environment inside its semi-permeable capsule. By its origin, cataracts can be congenital and acquired. 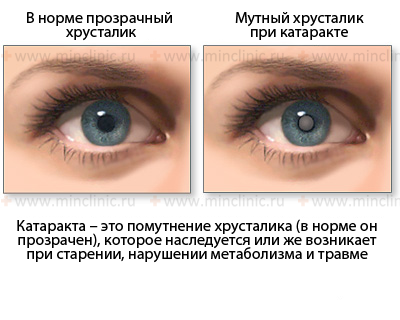 A cataract is a clouding of the lens (normally transparent), which is inherited or occurs with aging, metabolic disorders, and trauma.

Congenital cataracts occur in the following diseases of the patient:

Two types of cataracts are described in diabetic patients:

Snowflake cataracts are common in insulin-dependent diabetes. The development of a snowflake-type cataract begins in the subcapsular region. Senile cataracts develop at an earlier age in diabetics than in non-diabetic people and mature faster.

Other metabolic disorders that often lead to the development of cataracts include:

Cataracts located in the back of the lens develop in more than one-third of patients with myotonic dystrophy. The formation of cataracts in the posterior subcapsular region is facilitated by the systematic intake of corticosteroids. Also, the following diseases can lead to the development of cataracts:

Visual disturbances in cataracts are manifested by blurred vision with preserved light perception, duplication of the image (monocular diplopia), a change in color perception, and a decrease in visual acuity. Surgical removal of the cataract can lead to complete restoration of the patient's vision. 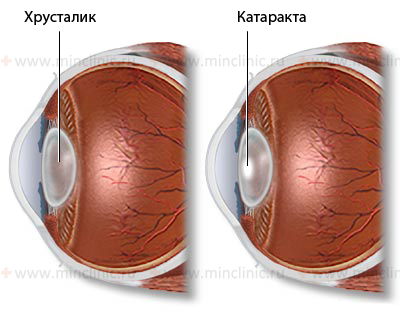 To completely restore impaired vision in a patient, an operation is performed to surgically remove a cataract.

Dislocation or subluxation (ectopia) of the lens occurs with homocystinuria and Marfan syndrome. In such conditions, dislocation of the lens can accelerate the development of glaucoma.

As a person ages, the vitreous body undergoes significant physical and biochemical changes, like the rest of the body's connective tissue.

Asteroid hyalite (Benson's disease) is characterized by the formation of minute yellow opacities in the vitreous body. These opacities are composed of calcium soaps (palmitate and stearate). A similar condition, reflecting vitreous dystrophy, can occur in patients with diabetes mellitus, and also often occurs in patients without signs of obvious eye disease. Vitreous opacity can occur with primary amyloidosis. With reticulosarcoma and retinoblastoma, tumor cells can be found floating freely in the liquid part of the vitreous.

Vitrectomy, the most important advance in the treatment of vitreous lesions, is used to cleanse the vitreous from opacities and reduce or prevent vitreoretinal traction. If amyloidosis or reticulosarcoma is suspected, a routine vitreous biopsy can provide valuable information.

Lesions of the choroid itself are rare in clinical practice. 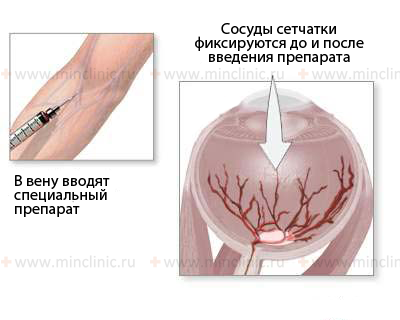 To visualize the retinal vessels, a contrast agent is injected into the patient's vein, which enhances the visualization of the choroid.