Panaritium is an acute inflammation of the tissues of the finger. Panaritium usually develops when pathogens of a purulent infection enter the tissue of a finger with microtrauma (injections, abrasions, cracks, etc.). On the palmar surface of the fingers, the skin is connected to the palmar aponeurosis by tendon bridges, thus forming channels.

Infection with panaritium through these channels quickly spreads inward, and edema with inflammation in a limited cavity (between the tendon bridges) leads to an increase in pressure, compression of the feeding vessels, and the occurrence of necrosis. 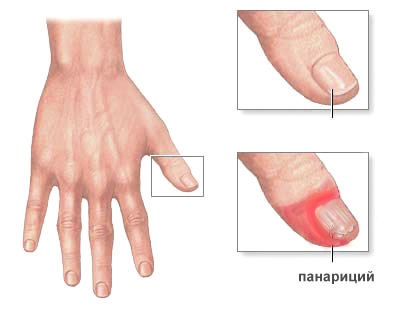 Felon. The initial manifestations are characterized by hyperemia and tissue edema, sharp soreness of the finger. The nail plate is deformed.

If there is a suspicion of an infectious process on the finger (panaritium), waiting is unacceptable: an early surgical operation is necessary with the obligatory removal of necrotic tissues.

Paronychia is an inflammation of the periungual fold. The causes of paronychia of the periungual roller on the finger: superficial trauma during a manicure, tearing off the burrs. With paronychia, there is redness, swelling, and pain in the area of the nail fold, from under which pus can be released. 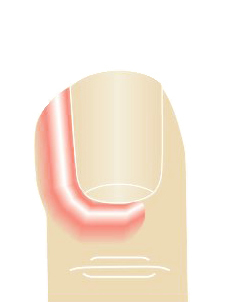 Paronychium. Swollen, hyperemic edge of the nail bed on the finger. With inadequate treatment, panaritium may develop.

Treatment of subungual felon is prompt - removal of the nail (partial or complete) is necessary. 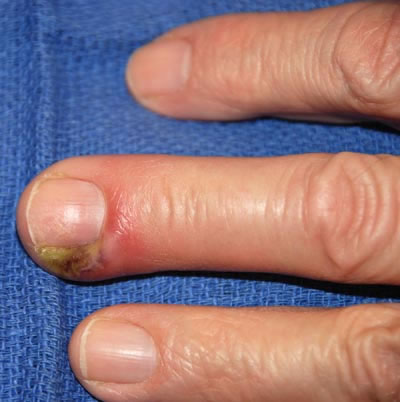 Cutaneous panaritium of the lateral edge of the nail bed. Edema, hyperemia and abscess formation of the soft tissues of the finger are visible.

After removing the epidermis, it is necessary to carefully examine the base of the abscess; at the bottom, a fistulous passage leading to the deeper parts of the finger may open (skin panaritium may be a manifestation of panaritium "in the form of a cufflink": the main focus is subcutaneous panaritium). 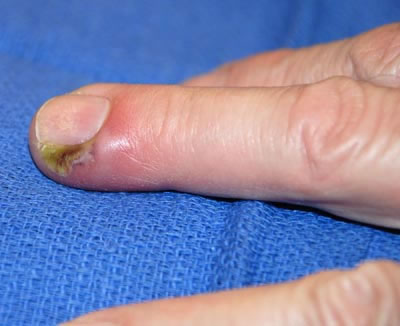 Swollen, tense, sharply painful nail phalanx with cutaneous panaritium. An area of necrotic tissue of the finger is visible.

Conservative treatment of finger joint panaritium can be carried out only in the earliest stages (puncture of the joint with washing the cavity with antibiotics). With increased pain and late stages of articular felon, surgical treatment is necessary. The prognosis for articular panaritium is unfavorable. 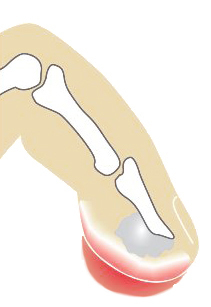 Bone and tendon felon, the focus of infection is localized in the deep-lying tissues of the finger.