In the case of congenital syringomyelia, the disease begins with a lesion of the middle parts at the cervical level and then spreads up to the medulla oblongata and down to the level of the lumbar spinal cord. Often syringomyelic cavities are located eccentrically, which causes patients to have a neurological clinic of a unilateral conductor character or an asymmetry of tendon and periosteal reflexes.

In many cases of syringomyelia, patients also experience a combination with congenital anomalies of the neck and head structures (craniovertebral anomalies):

On the MRI of the cervical spinal cord, two syringomyelia cavities filled with CSF are visible (indicated by arrows).

Clinical symptoms of syringomyelia and syringobulbia

More often, symptoms in patients with syringomyelia manifest themselves asymmetrically in the form of a unilateral decrease in sensitivity. In some patients, pain sensitivity on the face may be reduced, which is caused by damage to the nucleus of the spinal pathway of the trigeminal nerve at the level of the upper cervical segments of the spinal cord. Cough provocation of headache and neck pain occurs in a patient with a combination of syringomyelia with an Arnold-Chiari malformation.

In idiopathic cases of syringomyelia, neurological symptoms form in adolescents or young adults and progress unevenly. Often, neurological symptoms stop progressing in the future for several years. Some patients with syringomyelia do not become disabled, but most of them are not able to serve themselves and move independently. Loss of pain sensitivity (analgesia) in patients with syringomyelia contributes to the appearance of injuries, burns, and trophic ulcers on the fingertips.

On the MRI of the cervical spinal cord, the syringomyelia cavity is determined at the level of the body of the C6 vertebra (indicated by the arrow).

At the advanced stages of the course of syringomyelia, neurogenic arthropathy (Charcot's joint) of the shoulder, elbow, and knee joints may develop. The pronounced weakness in the lower extremities or increased reflexes (hyperreflexia) indicates a concomitant abnormality of the cervical-cranial (craniovertebral) articulation.

The slow enlargement of the syringomyelic cavity leads to a narrowing or complete blockage of the subarachnoid space around the spinal cord. Syringomyelic cavities may be separated from the central canal, but are usually connected to it.

The diagnosis of syringomyelia is made based on clinical signs and is confirmed by the detection of an enlarged cervical spinal cord during myelography, as well as by the results of a CT scan of the spinal cord performed a few hours after the introduction of a water-soluble contrast agent into the subarachnoid space. Cystic cavities are best seen by MRI imaging of the spinal cord. In connection with the possibility of the patient having another congenital malformation, it is also necessary to conduct an additional study of the cervical-occipital junction. 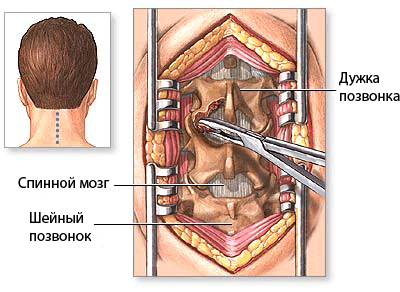 To decompress the spinal cord in syringomyelia, a laminectomy operation is performed, which eliminates its compression.